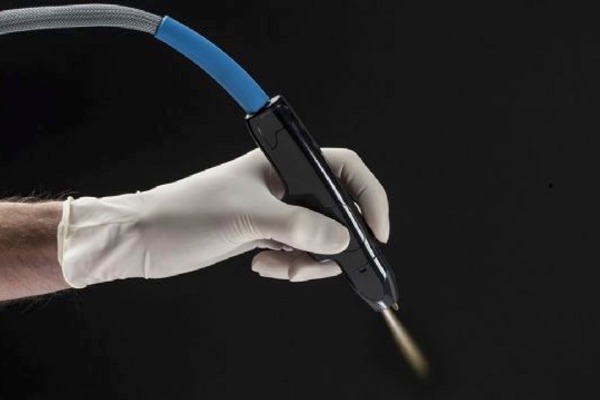 Plasma skin resurfacing (PSR) uses plasma to deliver heat to a targeted treatment area to achieve skin rejuvenation without effecting the surrounding tissues. PSR uses an ultra-high frequency (UHF) generator to convert inert nitrogen gas into activated ionised gas, which is called plasma. The technology was pioneered by the development of the Portrait® Plasma Skin Rejuvenation device which was later rebranded and relaunched with further generation devices. Currently the Neogen™ Plasma Skin Regeneration (PSR) System is the only device being commercialised which uses plasma for a skin rejuvenation indication. High energy treatments (PSR3) are used to achieve skin tightening and skin contouring, while lower energy treatments (PSR1 & 2) are used to treat the early signs of ageing, such as age spots, lines and wrinkles. A full face, high energy plasma skin resurfacing treatment costs approximately £3,000, with a low energy version priced at approximately £900. Smaller treatments, such as around the eyes or around the mouth can cost approximately £900.

The treatment is unique in cosmetic medicine in that it does not use a more traditional energy source, such as lasers and light (IPL, LED etc.), radiofrequency or ultrasound to deliver the heat required to target the desired skin cells.

Instead, it uses plasma which is an activated ionised gas converted from inert nitrogen gas. Plasma is known as the fourth state of matter, with the others being solid, liquid and gas. 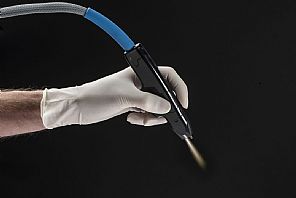 The technology was pioneered by the development of the Portrait® Plasma Skin Rejuvenation (PSR3) device by Rhytec, this was subsequently acquired by the Energist Group who rebranded the technology and launched a second generation device called Portrait® NeoGen in 2012 and later as the Neogen™ Plasma Skin Regeneration (PSR) System in 2013. Currently this is the only device being commercialised which uses plasma for a skin rejuvenation indication.

Unlike light based technologies, PSR doesn’t require a chromophore to attract it to the target area such as pigment, blood or water. Instead it provides a controlled, uniform, non-fractionated energy absorption or heating across the whole skin area being targeted, without damaging the outer layers of skin. It produces high levels of energy which it is claimed provides significant tightening.

Varying settings (PSR1, 2 & 3) can be utilised in order to deliver differing depths of effect, including deep dermal heating to promote collagen renewal, and superficial epidermal sloughing to reduce the appearance of fine lines and wrinkles.

If you’re considering plasma skin resurfacing the following information will give you a basic understanding of the treatment. It can't answer all your questions, since a lot depends on the individual patient and the practitioner. Please ask a practitioner about anything you don't understand. 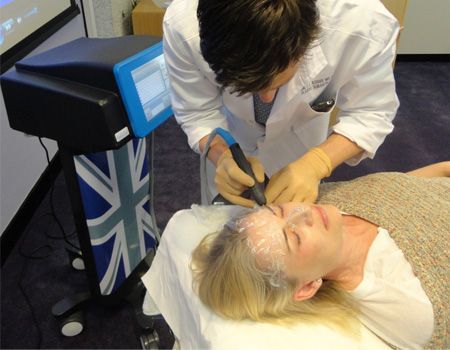 This plasma energy is directed through the tip of the handpiece onto the targeted area, and the energy is absorbed by the targeted skin cells. This damages the cell, which encourages regeneration and regrowth. This is what enables collagen renewal and the remodelling of the internal architecture of skin, smoothing fine lines, wrinkles and tightening sagging, loose skin, allowing new, fresh skin to show through. This damage also works as what is known as a “biological dressing”, which allows the skin cells underneath to regenerate, creating the perfect conditions for continuous improvement.

Plasma skin resurfacing works in a similar way to ablative (fractional) laser skin resurfacing in that minor, incredibly targeted energy damages very specific skin cells to encourage cell regrowth and renewal, which can not only improve skin tone and texture, but can also reduce scarring, improve a number of common skin complaints and increase skin contouring.

PSR can be delivered at between 1 and 4 joules of energy, with varying pulse repetition rates of between 1 – 2.5Hz. High energy treatments (PSR3) are typically used to achieve skin tightening and skin contouring, while lower energy treatments (PSR1 & 2) are used to treat the early signs of ageing, such as hyperpigmentation (brown marks and age spots), wrinkles and creases around the nose and mouth and loosening skin.

Plasma skin resurfacing can treat a number of skin complaints associated with early ageing, including: skin laxity and sagging, fine lines and wrinkles, poor skin texture and hyperpigmentation. It can also treat skin scarring as well as scarring associated with acne, and skin problems such as actinic and seborrheic keratosis, commonly referred to as liver, sun and age spots, and large visible pores. Skin on the face, neck and hands can be treated.

It is recommended than sun protection creams should be used daily for at least two weeks daily prior to your treatment, if not already being used daily.

Professional strength skincare products with ingredients such as retinols, alpha-hydroxy acids (AHAs), tretinoin or any type of vitamin A derivatives should be avoided, and anti-viral medicines may be prescribed if you are known to have a history of cold sores.

Your practitioner may prescribe medicine even if you do not have a history of cold sores if you have other contra-indications which may put you at risk of developing side effects following treatment.

You practitioner will discuss the treatment with you and your reasons for wanting it. This is very important before you begin the treatment. You must also make sure that this treatment can deliver what you want and give you the results that you are looking for afterwards. Your practitioner should be able to answer all these questions and confirm that this is the best treatment option for you.

A medical history should also be taken to make sure that there are no reasons why you shouldn’t undertake treatment. You should be asked to sign a consent form which means that you have understood the potential benefits and risks associated with the procedure.

Procedure
To reduce discomfort and any pain associated with the treatment a topical anaesthetic will be applied to the skin before treatment begins to numb the area a little more.

During treatment, the practitioner will pass the handpiece over your skin, delivering targeted plasma energy across the epidermis. You may experience a feeling of heat during treatment, although with the use of the topical anaesthetic it should be relatively painless.

A full face treatment usually takes around 45 minutes, with peri-orbital (around the eyes) and peri-oral (around the mouth) treatments taking around 10-15 minutes per session. You may wish to rest for a little while following the treatment session, depending on the energy levels used and your toleration to discomfort, and then you will be free to go home.

Generally, you should be able to return to your normal activities fairly quickly, usually within the day or two following treatment, provided that you feel okay to do so.

Immediately following treatment, your skin will be red and may appear swollen. Over the next day or two, the areas that were treated will turn bronze/brown in colour, a bit like sun tan, before eventually flaking and peeling away. Do not be tempted to pick or manually try to peel the skin away.

Side effects are usually minimal from plasma skin resurfacing treatment but can include skin discolouration, shedding, flaking, scaling, crusting and peeling.

These side effects typically resolve within 7-10 days. You may also experience some redness and swelling, as well as some temporary hyperpigmentation (darker areas of skin).

Following treatment, you are advised not to wash the treated areas for at least 24 hours.

You are advised not to pick or peel flaking skin in order to prevent scarring.

You should apply daily sunscreen and take adequate precautions when out in the sun. For several months following treatment, you should also use a moisturising sun protection cream in the treated area and wear loose clothing over it and wide-brimmed hats to provide protection from the sun.

For at least the first 10 days following treatment, you should be very delicate with the treated areas of skin. To relieve itching, you can gently dab or spritz diluted vinegar onto the skin. You should also apply Vaseline or similar to the skin twice a day or until the peeling subsides.

If you’re experiencing swelling or redness, apply ice packs to the treated area at 10 minute intervals following treatment. This should reduce any pain you may be experiencing and with repeated applications, will reduce swelling too.

If you experience any pain following treatment, you can take over the counter painkillers such as paracetamol and ibuprofen to control your symptoms. If the pain persists for longer than three days you will need to contact your practitioner who can review your recovery and suitable pain relief options.

Plasma skin resurfacing is generally suitable for most people, as it is particularly effective at treating notoriously difficult-to-treat areas such as around the eyes and around the mouth. It’s also suitable for most skin types and textures, although there are some contra-indications, listed below:

Plasma skin resurfacing is a unique alternative to more invasive cosmetic surgeries and is ideal for candidates who are beginning to show some of the early signs of ageing. Results from PSR are permanent and although your skin will still be subject to the potentially damaging effects of gravity and UVA/UVB rays, it can turn back the clock, smoothing out imperfections and vastly improving skin tone and texture after just one treatment.