Launched in the UK in December 2007, the Pharaon Lipo® Laser device heralds from the French company Osyris (Optical Systems for Research, Industry and Science) and is distributed in the UK by Sigmacon Ltd. It uses a laser system to break down stubborn areas of fat.

Marketed for Laser Lipolysis , this laser-assisted liposculpture treatment breaks down the membranes of the fat cells, transforming them into an oily substance (liquid fat) that may be removed through low-pressuresuction or absorbed and eliminated by the body itself.

The procedure is significantly lesstraumatic than traditional liposuction (i.e. less bruising and quicker recovery times) and involves practically noloss of blood, (due in equal parts to the type of anaesthesia used and the heating effect of the laser which causes coagulation of the blood). In addition, the low level laser energy helps to stimulate collagen production in the skin resulting in skin tightening.

The Pharaon Lipo® utilises the most powerful Diode Laser for lipolysis, with almost 3 times the power of first generation Nd:Yag lasers, according to the manufacturers.

It is claimed by the manufacturers that this powerful targeted approach allows physicians to deliver significantly more targeted energy to better emulsify (liquefy) the fat than with other commercially available devices. As a diode laser does not target haemoglobin (red blood cells) as directly as a Nd:YAG 1064nm laser, the energy is targeted directly to the fat cells rather than to all the surrounding tissues.

Under local anaesthesia, a small puncture or incision is made in the skin and a very small tube or micro-cannula approximately 1mm to 2mm in diameter, containing a 600nm laser fibre is inserted into the skin. The cannula is then very gently moved back and forth delivering the laser`s energy to the fat cells, causing them to rupture and easily drain away to be processed by the body’s own natural metabolism or be aspirated (suck out) via a syringe or low-level suction after the laser. The surgeon is able to see where the end of the cannula is at all times due to a visible light that shines through the skin from optical fibre housed within the cannula.

The laser energy also interacts with the dermis layer of the skin, resulting in collagen shrinkage and tightening.

The laser causes small blood vessels to coagulate immediately on contact, resulting in less bleeding, swelling and bruising, and a quicker recovery time than conventional liposuction; and meaning that delicate areas such as the face, neck, back and knees can be treated using this method.

On average the procedure takes 1 hour per session, depending on the area(s) being treated.

The Pharaon Lipo® device can be used to remove small areas of stubborn fat, resistant to diet or exercise and works best on small areas of the face and body including:

The results are seen gradually over a number of weeks, though it may take several months (from 6 -12 months) for the maximum effects to be seen. This is because your body continues to process and naturally remove the released fat until none is left. However, right from day one most people can feel the treated area(s) as already having less fat when squeezed between the fingers.

Expect minor swelling, bruising, numbness or tenderness for a few days or longer. You will be required to wear compression bandages and you should be able to return to work within 1 – 2 days.

Those individuals fitted with a pace maker or who have hepatic insufficiency (liver problems).

More often than not, one treatment session per area is considered to be enough, however it all depends on the amount of fat to be removed, and if it is felt that the final result needs improving on or not.

Private costs for advanced laser lipolysis treatment with the Osyris Pharaon Lipo® laser depends on the size of the area(s) being treated, and the number of areas that you have done in one treatment session, typically one area of the body, such as the abdomen will cost on average £2,000. Additional areas treated at the same time will often add another £1,000 to the cost of treatment. 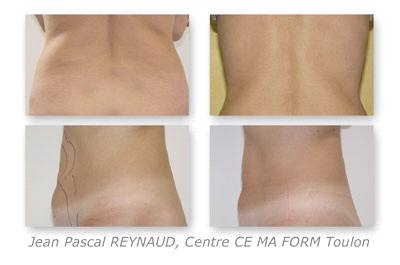