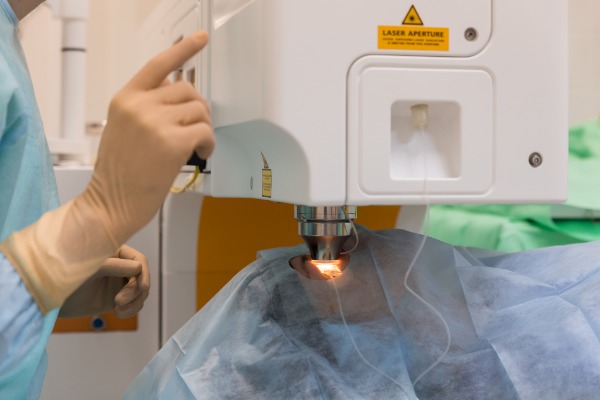 Results Duration: 1-3 months adjustment. Vision improvement is permanent depending on the individual

LASIK (Laser-Assisted in Situ Keratomileusis) is a laser eye surgery used to correct and enhance the vision of long-sighted (hyperopic) and short-sighted (myopic) people, as well as those with astigmatism. It is a surgical procedure intended to reduce a person's dependency on glasses or contact lenses in the long term. A LASIK procedure uses a laser to alter the shape of the cornea, which allows light travelling through it to focus on the retina at the back of the eye, allowing the person to view images in focus. The surgery takes around 15 minutes under a local anaesthetic. There are some risks associated with LASIK eye surgery. Because it is a very technical surgery, problems can occur. The ideal candidate should be over 18, who has had stable vision and an optical prescription for at least the last two years. Those with only mild long-sightedness, short-sightedness or astigmatism may not be suitable candidates. LASIK eye surgery prices start from approximately £895 per eye. More advanced LASIK can cost £1295 per eye.

LASIK eye surgery (short for Laser-Assisted in Situ Keratomileusis) is a corrective eye surgery used to correct and enhance the vision of long-sighted and short-sighted people, as well as those with astigmatism.

By 2008, more than 1 million LASIK eye surgeries were performed each year in the United States alone. In 2012, the number of people undergoing LASIK eye surgery was up by 7% and that figure is rising.

LASIK eye surgery remains one of the most popular surgeries there is, as patients are given the freedom to go about their daily lives without the need for contact lenses or glasses. Over 90% of patients will have their desired vision following the surgery, with that number increasing following an enhancement procedure.

The technology behind LASIK eye surgery actually dates back to the 1950s. The keratomileusis technique was developed by Colombian opthalmologist Jose Barraquer, whereby he would slice very thinly into the cornea to create small flaps that would alter its shape and therefore improve the vision of the patient. In 1968, the carbon-dioxide laser was developed at the University of California, which was the first step in creating the excimer laser used in laser eye surgery. The patent for LASIK eye surgery was granted in 1989 to Gholam Peyman, and since then, the process has been perfected into an extremely precise technique.

LASIK eye surgery can provide permanent results, provided that you are the right candidate and patients can expect an improvement in their vision within 24-48 hours following the surgery.

If you are considering LASIK eye surgery, the following information should give you a basic understanding of the procedure. It can’t answer all of your questions, as the outcome of the procedure depends on the individual patient and surgeon. Please ask a surgeon about anything you don’t understand.

LASIK eye surgery is a corrective eye surgery designed to correct the eyesight in patients who are long-sighted, short-sighted or who suffer from astigmatism. Long-sightedness, also known as hyperopia, affects the patient's ability to see things that are close in front of them. They might have difficulty in seeing the words on a page in front of them or seeing images on the television. Short-sightedness, also known as myopia, affects the patient's ability to clearly see objects in the distance. Objects in the distance might be blurry, while objects in the foreground tend to be very clear. Astigmatism is an optical defect that causes the vision to become blurred.

LASIK eye surgery works to correct these vision problems by using a laser to alter the shape of the cornea, which allows light travelling through it to focus on the retina at the back of the eye, allowing the patient to view images in focus. The surgery takes around 15 minutes under a local anaesthetic.

Another variation is epi-LASIK or epithelial LASIK. This uses an epikeratome, a similar surgical tool to the microkeratome oscillating blade used for LASIK. The epikeratome uses a blunt separator rather than a sharp blade to separate the surface sheet of epithelial cells from the permanent corneal tissue. Epi-LASIK is suited to those people whose corneas are too flat for traditional LASIK.

Before surgery, you'll meet with a coordinator to evaluate the condition of your eyes and to take a number of measurements, including corneal thickness, corneal mapping, refraction, air pressure and the dilation of your pupils. These measurements allow your surgeon to go away and make their own measurements for using the laser during your surgery.

Your face should be clean and makeup free before both the evaluation and the surgery and your hair should be flat, without any accessories, so that your head can be put into the right position underneath the laser. You should also eat a light meal before your surgery and take any prescribed medications.

It cannot however treat or prevent presbyopia which is the situation whereby with age there is a progressively diminishing ability of the ability of the eye to focus on near objects, meaning that as may people age they start to require ‘reading glasses’.

The patient will be put under a local anaesthetic in the form of eye drops. A soft suction ring is applied to the eye to keep it in place. This can sometimes cause the small blood vessels within the eye to burst, resulting in some bleeding (or subconjunctival haemorrhage) within the white of the eye. This is harmless and should resolve within several weeks.

Once the eye is immobilised, either a microkeratome or a femtosecond laser will be used to cut a thin flap in the cornea. Folding back and lifting the corneal flap can sometimes be uncomfortable, although the process is relatively quick. This flap will then be peeled back and then a 193nm excimer laser will be used to remove microscopic amounts of corneal tissue, or in the case of astigmatism, to smooth out an irregularly-textured cornea. The laser vaporises the tissue from the cornea without causing any damage to adjacent tissue. Burning or cutting of tissue is not required to remove and smooth out the corneal tissue.

Once the corneal flap is lifted, the patient's vision will become blurry and they will only be able to see white light surrounding the orange light of the laser. This can lead to mild disorientation as the patient is unable to see.

Once the laser has reshaped the stromal layer, the corneal flap is gently pushed into place. The surgeon checks the area for the presence of air bubbles and debris and checks to determine proper fit on the eye. Natural adhesion will keep the corneal flap in place until it heals.

There is hardly any recovery time associated with LASIK eye surgery. Patients will typically see an improvement in their vision within 24-48 hours and the eyes are usually totally healed within a fortnight. For the first day or two, vision may be watery or hazy, but this will clear up as the eyes heal. There are no bandages or stitches required and pain is usually minimal during the recovery process. It may take between one and three months for vision to stabilise following the surgery, although you should notice a difference within a few days. Patients should be adequately informed by their surgeons of the importance of proper post-operative care to minimize the risk of complications, such as infection and inflammation.

There are some risks associated with LASIK eye surgery. Because it is a very technical surgery, problems can occur when the procedure is not performed as precisely as required and patients may experience issues with the corneal flap, such as infection or excess tears. If the cornea is not treated evenly, the patient may experience astigmatism. Other common side effects include: glare, halos and starbursts within the eyes, double vision and poor vision in dim light. These side effects might disappear within a few weeks following surgery, although they might persist for months or years.

In rare cases, LASIK eye surgery can cause a loss of your “best vision”, i.e. your vision using contact lenses or glasses. A common side effect of LASIK eye surgery is the sensation of dry eyes and these can be treated very simply with eye drops.

Patients will usually be given a course of antibiotic eye drops in order to prevent infection and inflammation and these eye drops are usually continued for a number of weeks following surgery. Usually, patients are given dark eyeglasses or are advised to wear sunglasses to protect their eyes from sunlight and bright light and may also be given protective goggles to wear while asleep, to prevent rubbing of the eyes and dry eyes. Some patients will also be required to use preservative-free tear drops to moisturise the eyes, and some will be given a bandage contact lens to aid healing. These contact lenses are typically removed within 3-4 days following surgery.

It's recommended that you do not drive or operate heavy machinery for the first few days following LASIK eye surgery, although some doctors might recommend that you wait for at least a week. You should see your doctor at regular intervals for the first six months following surgery, and you should wait for one to three days before taking part in any physical activity such as non-contact sports. Your doctor may advise that you wait for at least two weeks before using creams, lotions or makeup around the eye area and you should avoid swimming and hot tubs for around two months following surgery to avoid infection. Strenuous contact sports should be avoided for at least a month to avoid any possible damage to the eye area.

LASIK eye surgery is only suitable for certain candidates. The ideal candidate should be over 18, who has had stable vision and an optical prescription for at least the last two years. Those with only mild long-sightedness, short-sightedness or astigmatism may not be suitable candidates. LASIK eye surgery is usually only performed on healthy adults and it will not be performed on patients whose eyesight has altered significantly over the last 12 months, as this indicates that their eyesight is still changing. Patients with diabetes, arthritis or who are pregnant may also be unable to undergo LASIK eye surgery. Speak to a physician for more information on who is eligible and who is not eligible for this type of surgery.

Only fully trained and qualified physicians or cosmetic surgeons should perform LASIK eye surgery.
For more information about practitioner training, qualifications and relevant medical organisations please view the information contained within the Legislation section of the Consulting Room.

The price of LASIK eye surgery differs from provider to provider, but it starts from approximately £895 per eye. More advanced LASIK treatments can cost £1295 per eye.

LASIK eye surgery is a safe, non-invasive procedure that can improve eyesight within just 24 hours.

Suitable for a wide range of patients, LASIK eye surgery removes the need for glasses and contact lenses and can improve the self-esteem of patients, as well as their day-to-day life.

Although there are a number of common side effects associated with LASIK eye surgery, these tend to disappear within a few days in most patients, with life-long positive results.