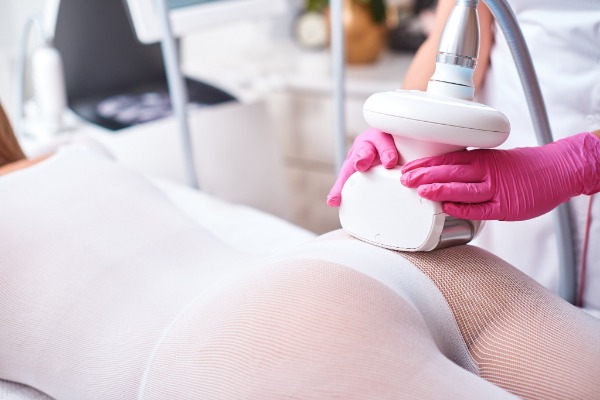 Cellulite shows itself as dimpling on the surface of the skin, likened to orange peel. It is found on the thighs and buttocks of many women. It is caused by the natural structure of the skin being stretched by fat cells growing too large, and is thought to also be as a result of poor blood and lymph circulation. Endermologie was pioneered by LPG Systems in France in the 1990s. Since its introduction to the USA, Endermologie has become the world's first patented technology to be approved by the American Food and Drugs Administration (FDA), who agree that it temporarily reduces the circumferential body measurements in cellulite treated areas. It involves the use of a motorized device with two adjustable rollers and controlled suction which is moved over the patient, who wears a specially designed body stocking. The continuous action of the rollers lessens the appearance of the cellulite, increases the blood circulation and stimulates the lymph system to remove toxins and unwanted fluid. Private costs for this type of treatment range from approximately £60 - £90 per session.

Treatments for cellulite remain largely unsuccessful because they only target the appearance of cellulite. Cellulite shows itself as dimpling on the surface of the skin which is sometimes referred to as looking like “orange peel”. It is caused by alterations to fat cells in the subcutaneous fat layer of the skin. As these alterations happen below the surface of the skin, it soon became obvious that to reduce these bumps and ripples would require a deep acting treatment.

Endermologie®, a sub dermal (or under the skin) approach to treating cellulite, was pioneered by LPG Systems in France in the 1990’s. Since its introduction to the U.S.A., Endermologie® has become the world’s first patented technology to be approved by the American Food and Drugs Administration (FDA).

The FDA supports the claim that deep mechanical massage with Endermologie® “temporarily reduces the circumferential body measurements in cellulite treated areas.” Put simply, in patients who have had Endermologie® to treat cellulite, their bodies have lost inches or an obvious “fatty” appearance in the areas treated. However, this effect is not permanent.

Although this treatment is generally targeted at women, there is medical evidence in men that has shown positive results for problem areas such as "love handles" and loose pectoral (chest) tissue.

According to statistics from the American Society for Aesthetic Plastic Surgery (ASAPS), just under 54,000 Americans had cellulite treatment (mechanical roller massage therapy) in 2005, a decrease of 34% on 2004 figures. (Note: ASAPS appeared to stop reporting on statistics for cellulite (mechanical massage) treatments after 2005. They started recording data again in 2013 for cellulite treatments using devices including Cellulaze, Cabochon and Smoothshapes however.)

According to 2017 statistics from the American Society for Aesthetic Plastic Surgery (ASAPS), 9,581 cellulite treatments, a decrease of 18.9% on the previous, were performed in the U.S. Again, ASAPS stopped recording data for cellulite treatments in 2018.

No similar statistics are available for the United Kingdom yet, but each year, more and more people in this country are having forehead lifts.

If you are considering Endermologie®, the following information will give you a basic understanding of the procedure. It can't answer all your questions, since a lot depends on the individual patient and the practitioner. Please ask a practitioner about anything you don't understand.

Endermologie® is non-surgical and non-invasive. It involves the use of a motorized device with two adjustable rollers and controlled suction. The skin gently folds and unfolds under the continuous action of the rollers and is literally “smoothed out”. Under the skin, the tissues have also been flattened which lessens the appearance of the cellulite.

As a result of this action, the circulation of the blood is increased and this nourishes the blood cells under the skin. At the same time, toxins and unwanted fluid are also removed. It is also claimed that new collagen is stimulated to grow in the treated area.

Other benefits of this treatment include reduction in minor muscle spasms and pains.

Other machines marketed in the U.K. for the treatment of cellulite also claim to work on the principal of vacuum massage and skin rolling. However, as an Endermologie® machine is a patented device of LPG systems, other equipment used by clinics (or devices that you can use at home) may not necessarily repeat the results achieved with Endermologie® and thus may not be as successful.

Careful discussions regarding your reasons for wanting treatment of your cellulite are very important before you begin the treatment. You must also make sure that this treatment can deliver what you want and how you would like to look afterwards. It is also worth researching whether this is the right sort of machine to treat your particular kind of cellulite and how successful it has been on other patients. Your practitioner should be able to answer all these questions.

This will differ depending on the type of machine used, but for Endermologie®, the following procedure is usually undertaken:

During each session, the patient wears a specially designed body stocking. The skin is literally “hoovered” with the head of the Endermologie® machine. Your problem areas are focused on, but time is given to other areas to stimulate general circulation and the removal of toxins and fluid.

You should usually see changes within 5 or 6 sessions, but 14 is the average number of suggested treatments. Monthly maintenance sessions are then suggested afterwards to maintain the results.

None is required and you can return to work or normal activities immediately after a treatment.

Some people find the action of the machine mildly uncomfortable, but it is not painful.

There is a risk of mild bruising of the skin that may occasionally occur in the area treated.

Most patients report a feeling of relaxation and an increase in energy following this deep massage treatment. Since the lymph system is stimulated by this procedure, it is important for the success of your treatment that you drink at least two litres of water every day during treatment in order to help the removal of toxins, which are disturbed by this process.

As long as you are generally healthy and don’t have any skin diseases or infections in the area treated, there are few medical reasons why patients should not undergo this treatment.

Although there is no evidence that this treatment is harmful for pregnant women, you would generally be advised to wait until after you have given birth before embarking upon a course of treatment.

Prices in private clinics offering mechanical massage cellulite treatment (Endermologie) should be in the £60 - £90 range for a 45 minute treatment session.

On average, you may need 14 sessions or more in order to achieve a good result.

Discounts are usually available for treatment courses so that 14 sessions may cost around £700.

Endermologie® really does appear to work, as it has been demonstrated over the past 12 years in thousands of case studies from around the world. Furthermore, Endermologie® is approved by the FDA, which has some of the strictest scientific standards in the world. The FDA has authorised Endermologie’s manufacturers to claim that it can temporarily reduce the appearance of cellulite in our bodies.

For practitioners using other machines claiming similar results using mechanical massage, please do your homework and make sure that they can deliver the results that you want.

However, please note that this type of treatment is not permanent, and in order to maintain results you will usually need ongoing monthly treatments.

Please note that results of non-surgical treatments vary enormously, depending upon both the patient and the skill of the individual practitioner.

We currently have no before and after images available for the use of mechanical massage for cellulite treatment.

The Velasmooth™ combined Infrared and RF energy technology (plus tissue mobilization and suction) has proven to be an effective body contour and fat reduction tool, as well as cellulite reduction tool