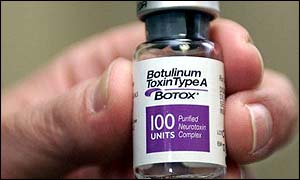 Currently the number one non-surgical aesthetic treatment in the U.S., Botox® is also the leading brand of botulinum toxin type - A in terms of documented clinical trials and practical use around the world.

It was the first botulinum toxin to gain a cosmetic licence endorsing its use for glabellar lines and wrinkles (as well as also being the first to get a licence for a crow`s feet indication). It is approved for glabellar treatments in the U.S. and around twelve other countries in the world, and was licenced for this use in the U.K. in March 2006 under the brand name Vistabel®.

Most of the literature on Botulinum Toxin, and hence the clinical evidence and statistics, are based on Botox® as this brand represents around 80% of the world’s use of Botulinum Toxin.

Because it is a prescription only medicine; it had to undergo strict clinical trials in the U.S., where it is approved for cosmetic use, in order to gain a license. Remember, the drug has been licensed in the U.S. since the late 1980s.

The graph below shows the results of a study published in 2001. 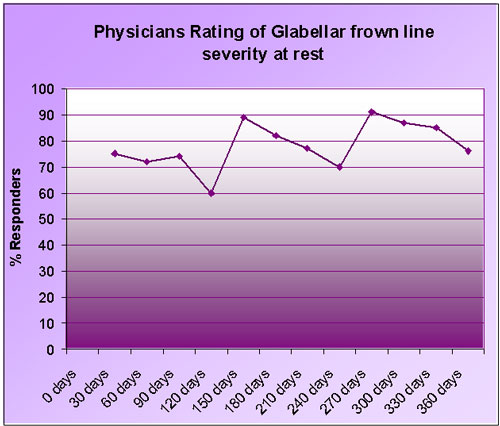 Data taken from Carruthers, Lowe, & Menter; One year study on the safety and efficacy of Botulinum toxin in Patients with Glabellar Lines; Presented at the AAD March 2001.

On the basis of this evidence, most practitioners would now recommend an initial course of Botox® treatment every 3 or 4 months for the first year. It now appears that after this, the time between future injections may lengthen, with practitioners reporting that some patients may only need to return twice a year to maintain results.

Most clinics and practitioners charge by area of the face treated.

These areas are usually defined as crow’s feet, forehead lines, and glabellar lines (frown lines between the eyes).

Practitioners may charge from around £175 - £300 per treatment area.

A discounted rate is usually employed if more than one treatment is required, so that crow’s feet, forehead lines, and glabellar lines may cost £500 or less for the complete package.

Click on Botulinum Toxin Side Effects to learn more about the risks or side effects.

It should be used by trained members of the medical profession only. A face-to-face consultation with a prescribing practitioner (i.e., doctor, nurse independent prescriber, dentist or pharmacist prescriber) is required before treatment can be performed by the same person or delegated to another practitioner.

Please go to our Find a Clinic section to find a practitioner specialising in this treatment.

Botox® is made from purified type - A neurotoxin produced by the bacteria Clostridium botulinum.

Before and after photographs are real patients, your results may differ.

Botox ® is a registered trademark of Allergan Inc.

Botox® is licenced in the UK for blepharospasm, hemifacial spasm, cervical dystonia, severe hyperhidrosis of the axillae, dynamic equinus foot deformity due to spasticity in ambulant paediatric cerebral palsy patients, two years of age or older, and for wrist and hand disability due to upper limb spasticity associated with stroke in adults.

In January 2014, Botox® was granted a licence for "the temporary improvement in the appearance of moderate to severe lateral canthal lines (crow`s feet lines) seen at maximum smile, either alone or when treated at the same time as glabellar (or frown) lines seen at maximum frown, in adult patients where these facial lines have an important psychological impact".