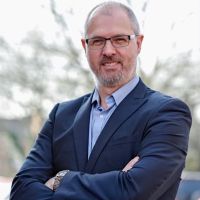 Initial training was in Edinburgh at the internationally recognised Medical School which is known for intensive anatomy training.  His medical degree was awarded from the University of Edinburgh but he also attained an intercalated honours degree in Medical Sciences with a thesis in immunology.  Always interested in a career in surgery, his initial interest was in Plastic & reconstructive Surgery gaininmg experience in Scotland and New Haven Hospital (associated with Yale University) in Connecticut, USA. There was further training in immediate pre-hospital medical care culminating in a diploma. Subsequently, he started general surgical training in Edinburgh, but his interest turned to heart and lung surgery, followed by specialist training in London. This provided the opportunity to work in centres of excellence at the Brompton Hospital, St Bartholomew’s Hospital and St Marys Hospital. Weekends were occupied working at the Harley Street Clinic assisting Professor Sir Magdi Yacoub performing complex operations, as well as volunteering his time for the Chain of Hope Charity which provides cardiac surgery to children from underdeveloped countries.

He is a Fellow of the Royal College of Surgeons of Edinburgh (FRCS), with intercollegiate specialist recognition.

In 2004, he was appointed a consultant cardiothoracic surgeon in the newly opened Wolverhampton Heart & Lung Centre for the NHS in the West Midlands.  With 3 others, he helped establish the centre as the most productive in the West Midlands with outstanding outcome data. His surgical interests and skills are varied, performing the full spectrum of thoracic and cardiac operations. He is an active and established educator and researcher, with appropriate credentials and recognition.

A relative newcomer to the field of aesthetics, since 2010 he has embraced this rapidly evolving area of specialised practice. In addition he has undergone further specialised training in a range of medical and surgical aesthetic procedures. These include: Liposuction using the BodyJet water assisted liposuction system which enables fat transfer; upper and lower eyelid surgery (blepharoplasty); face and neck lift using a new less invasive technique of aqua-dissection without the need for general anaesthesia.  Also, he has extensive experience and skills in non-surgical rejuvenation techniques. His educational skills were put to good use in leading the training programme for Silhouette Soft suspension sutures. He has trained over 100 doctors and dentists in the technique and also trained internationally.  One of 3 experts on the Medical Advisory board, he trained US doctors in establishing a training programme for the launch in North America. He is considered a key opinion leader covering a range of techniques.

His background as a cardiothoracic surgeon requires excellent surgical and professional skills. Heart surgeons require a high degree of fine motor skills as the surgery requires intricate precision. Cardiothoracic surgeons remain calm under pressure, using sound reasoning skills to select the most appropriate treatment for each patient. They also use their problem-solving and decision-making skills which are vital whilst carrying out live surgical procedures.

Mr Morgan has been featured in television documentaries on aesthetic surgery and has appeared in print media on topics including non-surgical rejuvenation techniques.

He exercises sound judgement in selecting the most appropriate treatment, which in some cases may be a simple as giving advice, up to surgical procedures. Aftercare is considered an important an integral part of any procedure, and is given high priority.